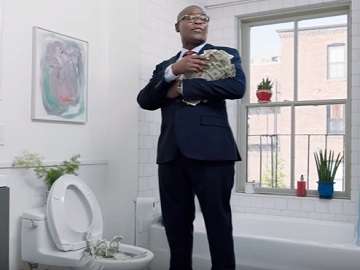 U.S. Cellular encourages people to get Unlimited with Payback from U.S. Cellular, “the only Unlimited Plan that pays you back for the data you don’t use,” in a new ad.

The spot features the company’s spokesman, actor Darien Sills-Evans, carrying a stack of dollar banknotes and introducing Unlimited with Payback from U.S. Cellular as “the only Unlimited Plan that pays you back for the data you don’t use.” He then urges viewers to quit flushing money down the toilet with their carrier and, while doing that himself, says “Bye Bye” to some of his banknotes.

The commercial ends with the voiceover inviting people to get Unlimited with Payback from U.S. Cellular and save even more with smartphones like the LG K+, Samsung Galaxy S5, and Galaxy S9, starting as low as $1/month. The offer ends October 14.

Sills-Evans, who is also a writer, comedian, and director, has been the national spokesperson for U.S. Cellular since at least 2011. In a recent ad, featuring him rushing down a hospital hallway along with a pregnant woman and her partner, he advertised the company’s Prepaid service and its limited-time offer that gives one month of service free.