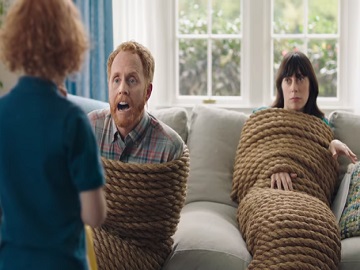 U.S. Cellular promotes its deal on iPhone in a hilarious new commercial, which urges viewers to not get roped in by hidden fees.

“If you’re not with U.S. Cellular, you’re probably roped into a plan with hidden fees,” the U.S. Cellular’s spokesman, Darien Sean Evans, says at the beginning of the 30-second spot, which features the members of a family literally roped in. The mother, looking at the wireless bill, is surprised to learn she must pay activation fees, monthly connection charges and data overages. When the father tries to argue that “it looked like a deal,” his teenage daughter tells him ironically “Nice deal, dad!” The company’s representative adds that “U.S. Cellular knows what matters,” specifying there are no hidden fees.

The end of the commercial sees the family’s youngest kid entering the living room and, asked by his dad to give him some chips, starting to eat a bunch of chips in front of him, taking advantage of the fact that he is roped in. The voiceover then says “Don’t get roped in! Switch to U.S. Cellular and get 50% off iPhone on us. No trade-in required. Plus, get no hidden fees and national coverage in the middle of anywhere”.

This is the latest in the series of ads focused on the practices of the company’s wireless rivals. Other spots released earlier this year urged people to “Don’t get hosed by hidden fees,” “don’t get blown away by hidden fees” and “Don’t hit walls” in their wireless coverage.

Formed in 1983 as a subsidiary of Telephone and Data Systems, the regional carrier owns and operates the fifth-largest wireless telecommunications network in the United States. Over the years, it has been rated as having “Highest in Wireless Call Quality Performance” (The North Central Region has received the award from 2006-2011), the best score out of all of the national carriers in terms of wireless service (2010) and the highest score in the customer service category (2010).

Darien Sean Evans, better known by his stage name, Darien Sills-Evans, is an actor, writer, comedian, and director, with guests appearances in series like Law & Order, Law & Order: Special Victims Unit, The Black Donnellys, Person of Interest, and others. He has been the national spokesperson for U.S. Cellular since at least 2011.