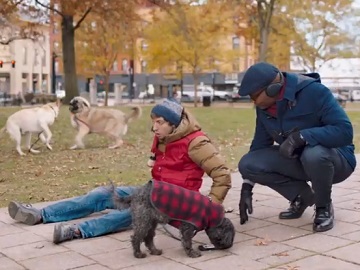 U.S. Cellular urges you, in its latest commercial, to stop hitting walls in your wireless coverage.

“You can depend on prepaid from U.S. Cellular because U.S. Cellular gives all its customers its strong signal,” the company’s spokesman, Darien Sills-Evans, says at the beginning of the 30-second spot, as he walks by a dog walker, who it turns out has a different carrier and hits the wall in his wireless coverage. Fallen to the ground (after hitting the invisible wall in his wireless coverage), he tries to recollect himself before the dogs run away. Sills-Evans starts playing with one of the dogs, a small one that’s willing to touch the guy’s phone, and then asks the dog walker how he is doing.

The commercial ends with the voiceover urging viewers to get U.S. Cellular Prepaid and save $15/month vs. Verizon Prepaid on Unlimited Data, plus a strong signal with national coverage.

Sills-Evans, who is also a writer, comedian, and director, has been the national spokesperson for U.S. Cellular since at least 2011. In another recent ad, he informs a bunch of people around a table that U.S. Cellular is starting Black Friday a week early and that they can switch and get the latest phones for free, which makes those people turn into gobblers on their quest to get as fast as possible to an U.S. Cellular store. Another ad, that promotes the company’s Prepaid service and its limited-time offer that gives one month of service free, features Sills-Evans rushing down a hospital hallway along with a pregnant woman and her partner, and another ad, that promotes the Unlimited with Payback from U.S.

Cellular, “the only Unlimited Plan that pays you back for the data you don’t use,” sees him flushing money down the toilet.

Tags: us cellular, US Cellular Dogs