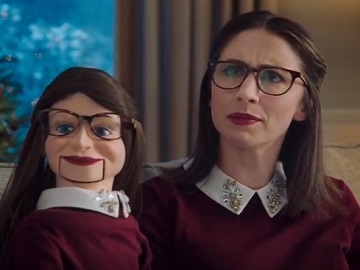 The 30-second spot opens with the company’s spokesman, actor Darien Sills-Evans, informing that, “At U.S.
Cellular’s Holiday Phone Sale, phones start at one dollar per month,” while in the background ventriloquist Janet and her puppet are having a disagreement. Hearing the news about the incredible price of the devices, the puppet can’t help but say “Wow!”. The ventriloquist says she wants to get one for herself, but she gets herself into trouble when she starts saying the word “dummy”. The puppet rebels against big Janet, asking to have a phone, as well, which leads Sills-Evans tell them that, with this deal, they can both get one. “Hear that, Janet? I have my own life,” the puppet concludes. Janet doesn’t give up and urges little Janet to go live it.

The commercial ends with the voiceover urging viewers to get phones starting at $1/month this holiday, only at U.S. Cellular.

Sills-Evans, who is also a writer, comedian, and director, has been the national spokesperson for U.S. Cellular since at least 2011. In another recent ad, he informs a bunch of people around a table that U.S. Cellular is starting Black Friday a week early and that they can switch and get the latest phones for free, which makes those people turn into gobblers on their quest to get as fast as possible to an U.S. Cellular store. While another ad, that promotes the company’s Prepaid service and its limited-time offer that gives one month of service free, features Sills-Evans rushing down a hospital hallway along with a pregnant woman and her partner, another ad, that promotes the Unlimited with Payback from U.S.

Cellular, “the only Unlimited Plan that pays you back for the data you don’t use,” sees him flushing money down the toilet.