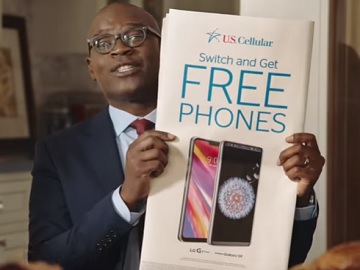 U.S. Cellular highlights that Black Friday starts early at U.S. Cellular in a new commercial, that urges viewers to switch and get the latest phones for free.

The 15-second spot opens with the company’s spokesman, Darien Sills-Evans, at a table, announcing that U.S. Cellular is starting Black Friday a week early and that “right now you can switch and get the latest phones for free,” to be able afterward, with shopping out of the way, to slow down and enjoy Thanksgiving. The ad features, in the meantime, several persons around the respective table, filled with festive meals, scarfing down as much as they can before rushing to U.S. Cellular to get the deal. They are all seen filling their plates at an incredible speed and then emptying them in the most unexpected ways. While a woman is shoving her vegetables into a blender and drinks the resulting smoothie, an old man is vacuuming the ailments off his plate into his mouth. When the lady announces that “it’s door-busting time,” everyone stands up and follows her, without giving up at their remaining food, though.

At the end of the commercial, the voiceover advises people to not ruin their holidays and get the latest phones for free after switching to U.S. Cellular.

Sills-Evans, who is also a writer, comedian, and director, has been the national spokesperson for U.S. Cellular since at least 2011. In another recent ad, featuring him rushing down a hospital hallway along with a pregnant woman and her partner, he advertised the company’s Prepaid service and its limited-time offer that gives one month of service free. He has also promoted the Unlimited with Payback from U.S. Cellular, “the only Unlimited Plan that pays you back for the data you don’t use,” in a commercial that sees him flushing money down the toilet.