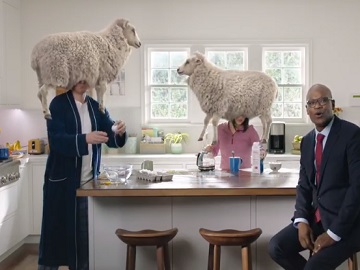 U.S. Cellular highlights, in a new commercial, that it has has no hidden fees, like connection charges on iPhones or Apple Watch, and urges you to not “get the wool pulled over your eyes by your carrier with hidden fees”.

The 30-second spot features a young couple in their kitchen trying to prepare breakfast with sheep covering half of their heads (as a metaphor for the wool pulled over their eyes). Looking at their wireless bill, the woman is surprised to learn there are monthly connection charges on each line. “Other carriers pull the wool over your eyes charging up to twenty dollars per month per line per connection charges,” the company’s spokesman, Darien Sills-Evans, says, while the two life partners make a mess around them because they don’t see well.

The commercial goes on with the spokesman adding that U.S. Cellular has no monthly connection charges and urging you to “Don’t get the wool pulled over your eyes”.

Formed in 1983 as a subsidiary of Telephone and Data Systems, the regional carrier owns and operates the fifth-largest wireless telecommunications network in the United States. Over the years, it has been rated as having “Highest in Wireless Call Quality Performance”.

(The North Central Region has received the award from 2006-2011), the best score out of all of the national carriers in terms of wireless service (2010) and the highest score in the customer service category (2010).

Darien Sean Evans, better known by his stage name, Darien Sills-Evans, is an actor, writer, comedian, and director, with guests appearances in series like Law & Order, Law & Order: Special Victims Unit, The Black Donnellys, Person of Interest, and others. He has been the national spokesperson for U.S. Cellular since at least 2011.