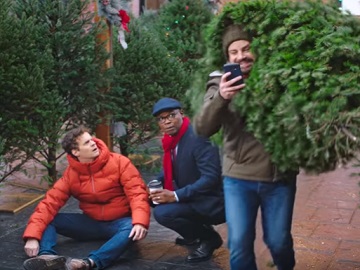 U.S. Cellular advertises its Prepaid services in a new commercial, urging viewers to get three months of service free this holiday season.

The 30-second spot opens with the company’s spokesman, Darien Sills-Evans, in a Christmas tree market saying “you can depend on Prepaid from U.S. Cellular because U.S. Cellular gives all its customers its strong signal.” He then points to the guy next to him who has just grabbed a nice Christmas tree and gets ready to take it home. Sills-Evans mentions that the respective man should better be careful because he has a different carrier and “hitting the wall in your wireless coverage… hurts”. As he says that, the guy carrying the Christmas tree hits an invisible wall while trying to let his wife know that he found “the perfect Christmas tree”. Unfortunately for him, this is the moment another guy, who’s been watching him from behind, takes advantage of the situation and steals his Christmas tree. “Honey, I found the perfect tree!” the thief tells his life partner over the phone as he walks away with a brisk pace.

The commercial ends with the voiceover urging viewers to get three months free when they switch to U.S. Cellular Prepaid plus a strong signal with national coverage.

Sills-Evans, who is also a writer, comedian, and director, has been the national spokesperson for U.S. Cellular since at least 2011. In another recent ad, he informs a bunch of people around a table that U.S. Cellular is starting Black Friday a week early and that they can switch and get the latest phones for free, which makes those people turn into gobblers on their quest to get as fast as possible to an U.S. Cellular store. While another ad, that promotes the company’s Prepaid service and its limited-time offer that gives one month of service free, features Sills-Evans rushing down a hospital hallway along with a pregnant woman and her partner, another ad, that promotes the Unlimited with Payback from U.S. Cellular, “the only Unlimited Plan that pays you back for the data you don’t use,” sees him flushing money down the toilet.