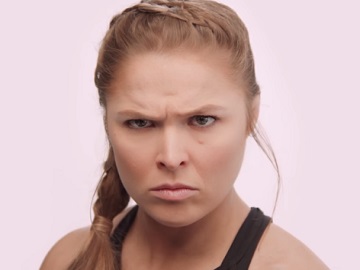 After its “Very Serious Film” and the series of 15-second spots featuring people who are trying to keep a serious face while their faces are tickled from offscreen by surprisingly long Twizzlers, the brand continues its “You Can’t Be Serious” campaign with a new spot, highlighting that “not even the very serious Ronda Rousey can be serious with Twizzlers”.

The 15-second ad stars the professional wrestler/actress/UFC champion losing a Twizzlers stare down. A few seconds later, she bursts into laughter and then takes a bite from a limp and droopy licorice twist. The brand’s tagline, “You Can’t Be Serious,” flashes across the screen.

Twizzlers’ “You Can’t Be Serious” campaign, from creative agency Crispin Porter & Bogusky, is only the latest advertising campaign Rousey stars in. She also appeared in commercials for MetroPCS, Reebok Women, Pantene Hair Products, and others.