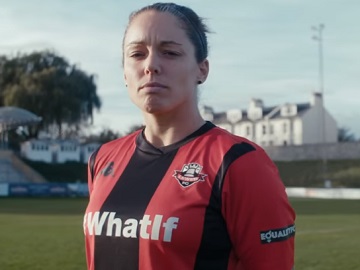 Across these short films, which come as Twitter & Women In Football take a stance for greater coverage of the Women’s game, to right the imbalance in the lead up to a World Cup year, the social media network showcases stories from women in football through different perspectives from world class pundits, players and Manchester City’s performance analyst.

“There’s something about football that just draws you in,” the voiceover says at the beginning of the 30-second trailer, which features Jacqui Oatley, players of the English football club Lewes FC, based in Lewes, East Sussex, twins Mollie and Rosie Kmita (Rosie is a professional footballer for West Ham United Women, while Mollie plays for Gillingham Ladies), and Roya Arabshashi.

“It’s been a case of making football more an equal environment, it’s going to take a couple of generations for exchange, but it is changing already,” a woman’s voice is heard saying at the end of the promo, which encourages viewers to watch the films @TwitterUK.