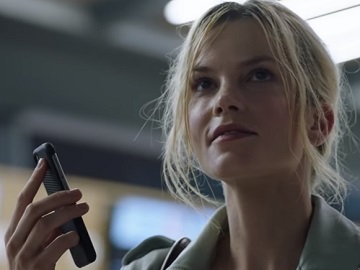 Turkish Airlines has released a trailer for its upcoming campaign film from Oscar-nominated British film-maker and producer Ridley Scott.

The installment, titled “The Journey” and celebrating 85 years of Turkish Airlines, gives viewers a glimpse into the adventures of a young woman traveling to Istanbul. “Follow the journey through the grand new airport and the magical city of Istanbul. Let the chase. Lead the way” onscreen lines read throughout the video, while the protagonist – a beautiful, blonde woman, played by actress Sylvia Hoeks (known for her role in Blade Runner 2049) is seen taking photos of someone on the plane, running through the airport and following a woman through the city.
Asked by a man, at some point, as she’s sitting on a bench, if she’s waiting for someone, she replies she’s just looking. At the end of the video, a mysterious brunette woman (played by French actress Aure Atika) is featured. Among the locations featured throughout the film, besides the Istanbul airport, where Turkish Airlines’ cabin personnel are seen wearing their new uniforms, also are Çırağan Palace, Şerefiye (Theodosius) Cistern, Ortaköy Square, Galata Tower and the Bosphorus.

The airline informs that the full film will be “coming soon” without revealing a date, though.

The month of October, when Istanbul Airport was opened, marks a milestone in the journey of Turkish Airlines which began in 1933. On October 29, Istanbul hosted the world’s biggest airport under one roof.