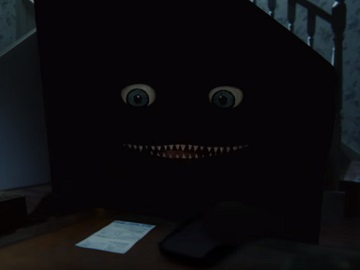 The Dark is brought to life in the latest TurboTax commercial, part of the company’s campaign aimed at highlighting there’s nothing to be afraid of even when it comes to doing your own taxes.

The 30-second spot opens with a woman coming down the stairs at night to go into the kitchen and goes on with a creature which was hidden in a closet under the stairs, in the dark, saying that “Not knowing exactly what something is can get us out of sorts.” Soon, it turns out the creature is the Dark, who gets out of the closet and reveals they do their taxes with TurboTax. “Snap a photo of your W2 and all your details are uploaded.” – the Dark says while actually taking a photo of the woman’s W2 with her smartphone, left on the table, in the living room.
“No kerfuffle, no tears, no drama…” – the Dark also says, but when the light is turned on it suddenly disappears to show up again from another dark corner to add “See, nothing to be afraid of”.

Earlier this month, TurboTax released a series of hilarious ads to promote its limited time tax preparation and filing offer Absolute Zero, that enabled taxpayers to file their federal (1040EZ/1040A) and state taxes easily and accurately for free, as well as the possibility to get a CPA to review your return with you, with TurboTax Live.

The spots featured a tiny knitted teddy bear that seemed scary when it actually wasn’t, a ghost that made noise in the attic of a family in her attempt to talk to a CPA, Chupacabra, a monster in the woods willing to learn from the TurboTax lady if it could use its mask as a deduction, and a father who finds out, the day he sees his newborn red-haired baby boy, that he isn’t actually his real father.