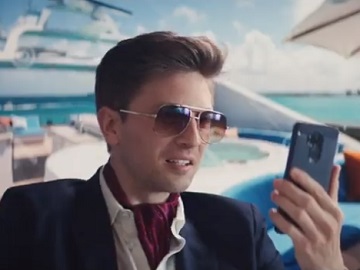 TurboTax advertises, in a new ad, its TurboTax Live service, which allows you to get a CPA to review your return with you.

The 30-second spot, titled “Compensating,” opens with a CPA named Gwen who tells the TurboTax user that she went through his return line by line and everything looks great. The young man, who’s apparently on a yacht, thanks the lady and says his income won’t always be that modest. “No worries, we’re here to help,” the CPA answers with a smile. The guy keeps saying that he got a lot of things happening, so next year it should be pretty impressive, referring to his income. He’s also specifying that he’s calling her from his yacht. At this point, the woman who’s working on a laptop, near him, reminds him that he’s not on a yacht, but in a conference room, and informs him that the respective lady can’t see him. Shocked to hear that, he can’t help but express his disappointment for having spent $9 on his coconut drink.

At the beginning of the year, TurboTax launched a new ad campaign to highlight that there’s nothing to be afraid of when it comes to doing your own taxes and that you can get a CPA to review your return with you, with TurboTax live.

This new feature offered by TurboTax allows users to quickly connect to a live CPA or EA on their computer screen to ask questions as often as they need while preparing their taxes. The CPA or EA will review the users’ work, make any necessary changes and givethe approval to file, with 100% Accuracy Guarantee (provided by TurboTax). According to Intuit, that produces the consumer tax preparation software package, the calculations are “100% accurate” so your taxes will be done right.

The campaign also includes other spots created on the same idea, that there’s nothing to be afraid, and features Chupacabra, a monster in the woods, a ghost in an attic, and a tiny bear that proves to be anything but scary, with his dance moves and gibberish sounds.