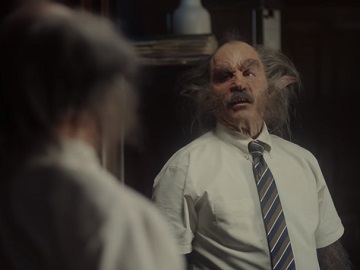 TurboTax has launched a new ad to remind people there are only 77 days until the tax deadline and that there’s nothing to be afraid of when you do your taxes with TurboTax.

Titled “Full Moon”, the spot features a werewolf in his office at home noticing there’s a full moon and revealing he’s scared because there are only 77 days until the tax deadline. Immediately after this, he starts growling and smashing things around him. During a short break, when he takes a seat, he says that “TurboTax is here for you” and urges viewers to take a photo of their W-2, mentioning this is enough for all their details to be uploaded.

The spot ends with the werewolf throwing himself outside through the window and telling an old man walking his dog on a nearby alley that “really, there’s nothing to be afraid of”.

Earlier this month, TurboTax released a series of hilarious ads to promote Absolute Zero, a tax preparation and filing offer valid for a limited time, that enables taxpayers to file their federal (1040EZ/1040A) and state taxes easily and accurately for free. In addition to that, several spots were highlighting the taxpayers’ possibility to get a CPA to help them review their return, with TurboTax Live. Among the “protagonists” of these spots are a tiny knitted teddy bear that shows off some bold dance moves to a woman hiding in the closet, a ghost that makes noise in the attic of a family in its attempt to talk to a CPA, a monster in the woods willing to learn from the TurboTax lady if it could use its mask as a deduction, and a father who realizes his newborn red-haired baby boy is not his son, but someone else’s son.