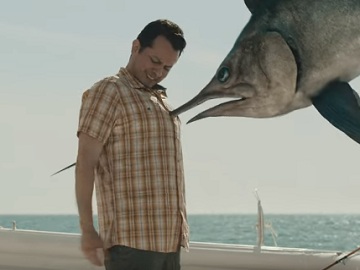 TurboTax has launched a new commercial to highlight that, with TurboTax Absolute Zero, your taxes are free.

The 30-second spot features two men on a boat, with one of them fishing and the other keeping him company. When the fish caught by his fellow, which proves to be a swordfish, impales him in the chest, he says, upset, that the shirt he’s wearing is his lucky shirt. “At least your taxes are free.” – the fisher answers. At this point, another man shows up, holding two drinks in his hands. “What happened?” – he asks looking at his friend impaled by the swordfish. “It’s his lucky shirt.” – the fisher says. “Well, with TurboTax AbsoluteZero, at least your taxes are free.” – the man with the sodas says.

“That’s what I said.” – the fisher says and then they both start laughing. The “victim” starts laughing, as well.
Described as “the nation’s first no-strings-attached, totally free tax preparation and filing offer”, TurboTax Absolute Zero enables taxpayers filing a 1040A or 1040EZ the chance to file their federal and state taxes easily and accurately for zero dollars.

TurboTax Absolute Zero with TurboTax Free Edition now includes the following services for free, according to the company: Prior Year Import, which is “free prior year import of last year’s tax return if you’re a new TurboTax customer that filed with another provider in 2017, eliminating data entry and giving an effortless, worry-free jump-start on your taxes”, and Analysis and Advice, which enables you to get “expert tips to help you get a bigger tax refund next year”.