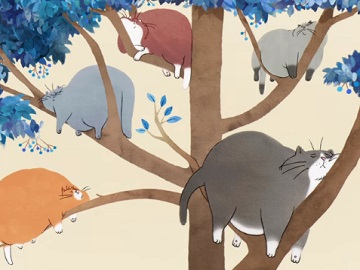 TSB encourages UK banking customers to question their current banking relationship and, if it’s not working for them, break free and go somewhere better.

“It can sometimes feel like banks do as little as possible for their customers. Like not paying interest on current accounts. And only bothering to get in touch when they have something to sell. And it’s a fact that millions of people are missing out on hundreds of pounds by not switching banks. So if you think your bank’s taking you for granted, break free and go somewhere better.” the voiceover, Scottish actress Kelly Macdonald, says on the 30-second animated spot, which depicts the five largest UK retail banks (Barclays, HSBC, Lloyds, RBS and Santander) as lazy fat cats sleeping in a tree. A red squirrel is also featured facing the impossibility to reach acorns because of the cats sitting on the branches and a small blue bird that makes one of the cats slip off, allowing thus the squirrel to reach its food. The advert ends with the onscreen line “Break free and go somewhere better” and the hashtag “#CompetitionMatters”.

“TSB is relentlessly campaigning for a transformation of the entire banking industry so that it works in customers’ interests not just the banks’,” according to TSB. The company also informs that All Plus account customers get 3% interest on balances up to £1,500, which “isn’t just a teaser rate that gets taken away after a year”.