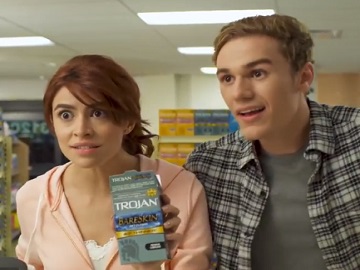 Trojan promotes, in a new commercial, its BareSkin Condoms, aimed at highlighting that they are 40% thinner than the standard latex condom so you can experience ultimate pleasure.

The spot opens with a young couple entering a 24 hours pharmacy in the middle of the night to ask the pharmacist what she has sold them because condoms “don’t feel like this”. Informed that those are BareSkin Condoms, which are 40% thinner so they can get closer, the two lovers ask for three boxes and then rush out.

The ad, concluding with the tagline “You can’t wait to get in on”, also highlights that Trojan is “America’s #1 condom trusted for over 100 years.

Specially designed to make you feel closer and electronically tested for strength to help ensure reliability, the Trojan BareSkin Condoms are made from premium quality latex to help reduce the risk and contain a silky smooth lubricant for comfort and sensitivity.

A previous commercial promoting the BareSkin Condoms, released in 2016, featured rapper and comedian Lil Dicky ready to get busy with his girlfriend after a night out.