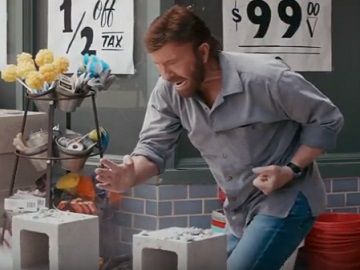 “When the world needs a hero, Chuck Norris calls the Toyota Tacoma” – this is the idea behind one of the latest Toyota commercials, titled “Tough as Chuck”.

The 30-second ad opens with Norris breaking a brick along the middle with his hand and a Tacoma owner asking him to give him an autograph on his car. Once it has Norris’s signature on it, the Toyota Tacoma becomes “tough as Chuck” and does all kinds of brave things, from saving a man buried up to his head in sand, showing up just in time to help a construction worker falling from a building, passing a ball from a tree to a guy, beating out a strong chess player at chess, surfing big waves, and knocking to the ground an Asian willing to show his kung-fu moves.

“From a clenched fist of a legend, rises a new action star. A hero who’s always there to save the day and night, a hero with all the right moves and moves you may never expected them, a hero who was born to outsmart the competition and lives to conquer any challenge,” the voiceover says, also describing the hero as “fearless and tough as Chuck Norris.” At this point, the spot takes viewers into an office of “Global Heroic Talent” organization, where Chuck Norris watches the video of the Tacoma performing all those “tasks” and realizes, in bewilderment, that he has been replaced with a truck.

This is not the first time the legendary actor works with a car brand. In 2017, Fiat Professional teamed up with Chuck Norris to be the “tough face” of its commercial vehicles in a series of new ads. He thus advertised international-market vans and pickups like the Fullback, Ducato, and Doblo.