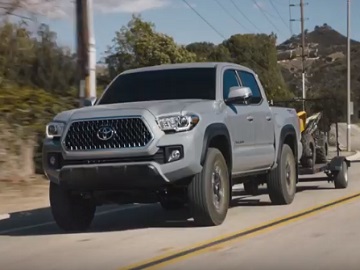 Toyota runs a series of new funny ads in the US to showcase some of the key features of the 2018 Tacoma.

One of them highlights that, with Lane Departure Alert, which comes standard on the new Tacoma, not even a rabbit chasing a carrot can throw you off. The 15-second commercial shows a prototype with options speeding down a street and the Lane Departure Alert system warning the driver about the vehicle leaving the lane, helping thus to avoid an incident. Not the same thing can be told though about the Taco Truck, which goes out of the road completely when the driver gets distracted by the rabbit and the carrot.

“If you want play, you need a Tacoma,” the voiceover says at the end of the spot.

Another commercial from the series focuses on the Pre-Collision System, which is also standard and can help mitigate or avoid a potential frontal collision by prompting the driver, through audio and visual alerts, to brake or, in case the driver doesn’t react, by automatically applying the brakes, using Brake Assist. And finally, in another commercial, former freestyle motocross rider and racer Andy Bell states that Toyota Tacoma is “the gold standard in off-roading”. The legendary Ivan “Iron Man” Stewart also makes an appearance, telling Bell about the Tacoma that it’s a “nice truck” and asking him when he is going to have a haircut.

The 2018 Tacoma also boasts off-road capability that allow you to go off the grid confidently, thanks to available features like Multi-terrain Select and Crawl Control (CRAWL), V6 engine, 6-speed transmission and 6800-lb. towing capacity.