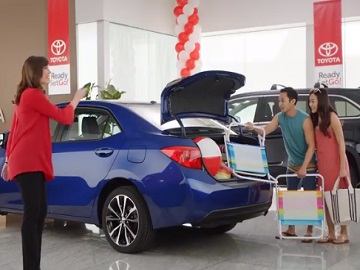 Toyota urges people, in a new ad promoting the Ready Set Go! Sales Event, to start their spring with great savings on an incredible selection of the brand’s most popular models.

The spot features Toyota’s spokeswoman, Jan, played by actress Laurel Coppock, encouraging viewers to enjoy the new season with a great deal on a new Toyota, like low APR financing on the technology-loaded Corolla, the adventurous RAV4, and the rugged Tundra.

“Right now, start your spring with great savings on an incredible selection of our most popular models,” the voiceover says at the end of the commercial, mentioning that the offer ends April 2, 2018. Viewers are also directed to Toyota’s website for great deals on other Toyotas.