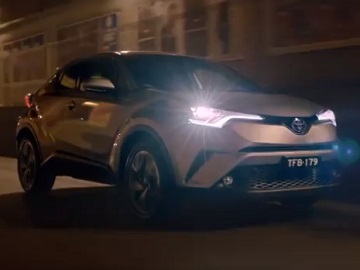 Toyota showcases the C-HR in a new ad running in Australia, that encourages people to never miss a thrill and open their eyes to the Toyota CH-R.

Titled “Leap. Live,” the 45-second spot opens with a boy who finds the courage to skateboard in front of his peers and goes on with other kids, teenagers and youngsters closing their eyes before important moments in their lives, such as the moment before a kiss, the moment before eating a spider, the moment before getting a tattoo, and more.

“Why do we close our eyes before life’s big moments? Life is a thrill. Open your eyes to the Toyota CH-R,” the voiceover says at the end of the ad.

Previous: 2019 Netflix Movies: Triple Frontier (Trailer Music)
Next: Telstra Christmas Commercial: Add On Something For Everyone This Christmas