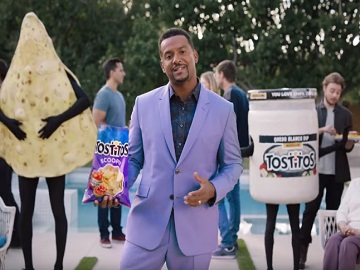 Tostitos has launched a new commercial, dubbed “Super Bowl Ads for All”, informing people that they can access an online service provided by the brand to create video invites to their Super Bowl party.

“Tostitos is making a Super Bowl-sized ad for your Super Bowl party.” – the ’90’s icon Alfonso Ribeiro says at the beginning of the 15-second spot, which features him at an outdoor party, surrounded by people and two guys dressed in costumes illustrating Tostitos products, from chips to Queso Blanco Dip Sauce. The voiceover then reveals that the Super Bowl-sized ads will be complete with “unexpected tackling, screaming guy, old ladies, talking animals, talking babies, talking robots, product placement, dancing mascots and a few explosions”, and urges you to get yours now at Tostitos’ website.

“I love everything about the Super Bowl…especially the ads and the celebrity cameos. So it was a no-brainer to partner with Tostitos on their Super Bowl campaign that highlights what we all love most about Super Bowl ads.” – Ribeiro said of his partnership with the PepsiCo owned snack brand, which is the Official Chip and Dip of the NFL.
What you need to do to in order to create a video invite to your Super Bowl party is to enter your name, location and time your Super Bowl party starts and Tostitos will take care of the rest.

Ribeiro, current host of “America’s Funniest Home Videos” on ABC, is the latest celebrity starring in a commercial for this year’s Super Bowl. Among the other stars that will feature an appearance in ads for the Big Game are also Matt Damon, who showcases Stella Artois’ limited-edition Chalice and promotes the brand’s initiative of donating money for every chalice purchased to Water.org, an NGO that provides clean water to people impacted by the global water crisis, Tiffany Haddish, recently named brand ambassador for Groupon, Bill Hader, who teamed up again with Documentary Now! Director Rhys Thomas for a witty and hilarious ad for Pringles, Tiffany Haddish, recently named brand ambassador for Groupon, and Danny DeVito and Trodick Hall, who will star in M&M’S commercial.