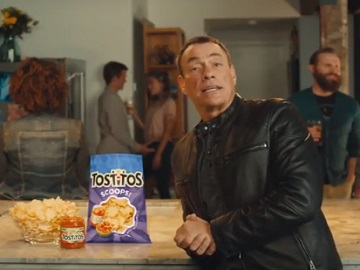 Tostitos continues its “Get Together Already” campaign with a new commercial starring Jean-Claude Van Damme. This time, the action film actor compares friends with salsa.

“Friends, they’re a lot like salsa. Each one’s unique an own way: hot, mild, cheesy, and garlic,” he says on the 15-second spot, while on screen people personifying these adjectives are seen – from a hot guy, who’s holding a jar of Chunky Habanero Hot Salsa and a chip in his hands and whispers “Hot” to the camera, a middle-aged woman who’s also holding a jar of Chunky Salsa, but Mild, while standing near a bowl full of chips, to a man who’s trying to impress a girl at a party with a jar of Cheesy Salsa, and a guy dressed as Dracula, explaining to Van Damme he thought it was a costume party.

“Get Together Already, with Tostitos!” Van Damme says at the end of the spot.

Created by Goodby Silverstein & Partners based on the idea that, if you don’t take time to hang out with your friends, they might replace you with a new friend, the campaign debuted in March with a main TV spot, titled “Pep Talk”, featuring Van Damme going from just hanging out with a group of youngsters at home to taking selfies with them, bonding over “chips (referring to tokens) and chips (referring to Tostitos chips)”, and even showing up at their wedding as both best man and bridesmaid. He urges Other shorter spots see the actor promoting various Tostitos products, like the Yellow Corn Bite Size, the signature corn chip, which he calls “friendchip”, Tostitos Scoops, Tostitos Bite Size, and others.

Jean-Claude Van Damme has appeared in various other commercials over the years. His portfolio includes the famous “Epic Split” spot for Volvo Trucks in 2013, where he is seen doing the splits between two Volvo Trucks, standing with each foot on the side-view mirror of the vehicles, and VCCP’s spot for Coors Light in the U.K., which sees him sculpting an ice bar.