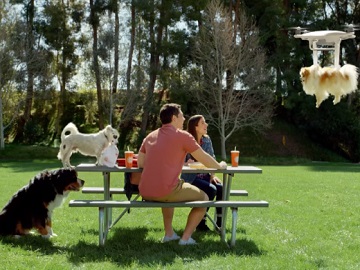 Togo’s have released a funny new ad to show how far some people would go for a Togo and herald the addition of its newest signature menu item, the Pretzelrami, which takes the brand’s “famous traditional pastrami sandwich to a whole new level of taste and quality”.

The 30-second spot opens with a young couple sitting at a table in the middle of nature, ready to have “the perfect lunch”. When they are about to grab their Togo’s sandwiches, a drone transporting a cute little dog shows up above them, distracting their attention. In the meantime, two others dogs work together to steal their lunch. When the drone flies away and they want to get back to their food, the guy and his girlfriend are shocked to realize they no longer have something to eat. As the spot ends, it turns out the three canines are the partners in crime of a guy willing to get his hands on a Togo. “Great work, guys!” he tells his furry friends.

“How far would you go for a Togo?” a voiceover asks in a singing voice, informing then Togo’s fans that the new Pretzelrami is here. Made with over a quarter pound of Togo’s famous pastrami layered with two slices of white cheddar cheese, aged for seven months, and finished off with tangy yellow mustard and crisp dill pickles, on a soft pretzel roll, the Pretzelrami is only one of the elements part of the brand refresh. The chain of sandwich restaurants has also introduced an updated logo, a new tagline, “True to the Sandwich”, and will gradually implement changes in terms of employee uniforms, packaging and even locations, which will undergo a facelift.

The “How Far Would You Go for a Togo?” marketing campaign, created by Siltanen & Partners of Los Angeles, also includes social media activity, the brand encouraging fans to share their own stories about how far they would go for a “Togo”.