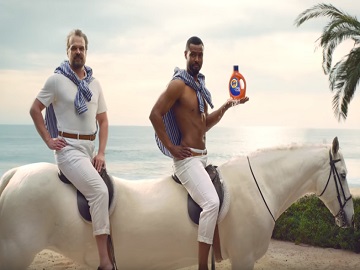 David Harbour has done lots of commercials in this year’s Tide Super Bowl ad. The “Stranger Things” star plays the lead in several spots that are a hilarious take on existing commercials, some of them released for last year’s Big Game. Thus, the actor is seen in a “typical Super Bowl car ad”, in which he’s donning a black suit while driving a luxurious car on a highway at sunset, in a “hilarious beer ad”, for a fragrance, posing for the camera in a giant clam shell and saying (“whatever this ad is”), and more, only to reveal they are actually all ads for the detergent. When a mechanic wearing a perfectly white shirt gets out from under the car he’s fixing (in a commercial for an insurance company) asks “What makes it a Tide ad?”, Harbour gives the explanation: “There are no stains.”. He is then seen popping up in an ad for a drink, filmed on the beach, in an ad for jewelry, for a mattress, for razors, for fitness programs, nutritional supplements, voice-enabled speaker.

“So, does this make every Super Bowl ad a Tide ad?”, Harbour asks while portraying a husband and father of two sitting on a couch together with his family. “I think it does.” – the voicever answers and the tagline “If it’s clean, it’s got to be Tide.” flashes across the screen.

Further references to commercials, including Old Spice and Mr. Proper, are made. The Old Spice male protagonist, bare-chested and wearing his white pants, as usual, comes to realize he is in a Tide ad and asks Harbour, who’s riding the same white horse with him, to get off his horse. The woman getting excited seeing Mr. Proper cleaning her living room is brought back to reality by Harbour, who tells her it’s a Tide ad and starts showing off his dance moves.

Tide’s Super Bowl LII commercial is considered one of the funniest, most memorable commercials of the night, alongside the ad for Doritos Blaze and Mountain Dew Ice, which starred Morgan Freeman and Game of Thrones’ Peter Dinklage, for Amazon, which starred Rebel Wilson, Anthony Hopkins, Gordon Ramsay, Cardi B, and the company’s CEO, Jeff Bezos, and for Tourism Australia, which starred Danny McBride and Aussie actor Chris Hemsworth.