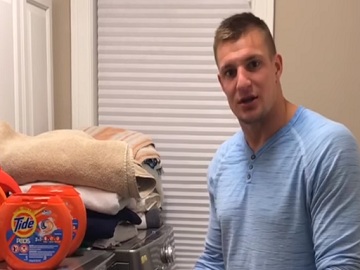 Rob Gronkowski highlights that Tide PODS should only be used for laundry in a new spot for the detergent brand, following the Tide PODS jokes (due to their packaging and appearance, being compared to various fruit-flavored snack foods) and the “Tide Pod Challenge”, which sees teenagers putting a Tide Pod in their mouths and posting on social media videos of them doing that.

New England Patriots tight end delivers the message in a hilarious way by answering a series of questions that appear on screen. “Hey Gronk, is eating Tide Pods ever a good idea?” – is the first question, to which Gronk answers “No” seven times. “Not even as a joke?” “No, No, No” – comes the answer. “Should you use Tide Pods for anything but cleaning clothes?” – is another question which is answered again with a big “No”. “What the heck is going on, people? Use Tide PODS for washing, not eating.” – Gronkowski says looking at the camera.

The spot ends with a warning informing viewers that laundry pacs are highly concentrated and that detergent is meant only to clean clothes. Finally, a Gronk’s quote appears, as well: “Do not eat”.

Rob Gronkowski, aka Gronk, who starred in several Tide commercials, is an ambassador for other brands, as well, including beef jerky Oberto, audio headphone and accessories brand SMS Audio (from 50 Cent), energy drink Monster, Dunkin’ Donuts, and more.