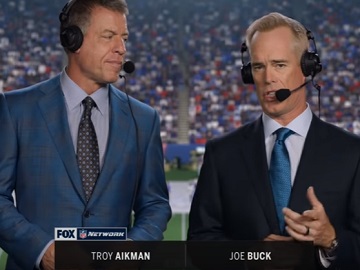 During Super Bowl LII, Tide made headlines by claiming every ad, as a Tide Ad. The brand’s “#TideAd” is back again, but this time there is a flag on the play.

Titled “Clean Call – A Thursday Night Tide Ad,” the spot opens with Troy Aikman and Joe Buck on FOX, on one of the network’s Thursday Night Football broadcasts, welcoming viewers back to New York and noticing that, down on the field, there seems to be some sort of discussion.

When the connection is passed down to those on the pitch, one referee makes a step ahead and says to the camera “We have intentional cleanliness on the field, resulting in a Tide ad.” He then mentions numbers 86 and 74 are both clean, and list other characters starring in the ad, including an oversized microphone guy, Joe and Troy, and the kicker. The latter, looking at the camera, as well, says “Obviously” in response to the referee’s remark and then Aikman and Buck suggest to go to commercial.

“Every Ad is a Tide Ad” tagline was introduced in the brand’s Super Bowl LII campaign, created by Saatchi & Saatchi New York and starring David Harbour. The Stranger Things actor stars in a series of four ads whose cost for the airtime in the Big Game added up to around $15 million.