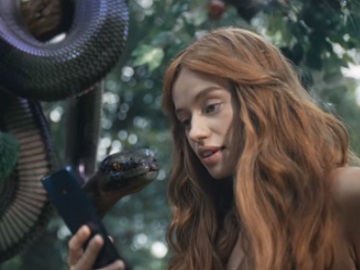 Three, one of the four major mobile networks in the UK, re-imagines life with phones in times when there were no phones, in its latest campaign, titled “Phones Are Good”.

The spot, created by Wieden & Kennedy, opens with a woman sitting on a toilet and scrolling down through article titles stating that phones are bad, they’ll end humanity and life was better before phones. At some point, her smartphone is dragged through a portal that takes it back in time and the ad goes on with a variety of historical scenarios that would have been totally different if the protagonists had had smartphones. Thus, it is shown that the Titanic does not hit the iceberg because its captain sees the hazard ahead and changes the ship’s route, a bunch of hungry cavemen uses the smartphone to order pizza, Henry VIII browses for new wives on Tinder, preventing thus the executions, Eve doesn’t not give in to temptation and doesn’t even watch the apple offered by the snake, being too busy watching on Instagram Adam’s photos, and people can capture moments that otherwise might not be believed by others.

“You see? Phones are good. And they’re even better on the best network for data. Three. UK,” the voiceover says at the end of the advert.

For the campaign, Three has partnered with Google Maps, Tinder, LinkedIn, Deliveroo and Snapchat, and included each of these apps in the two-and-a-half minute campaign film, which is set to debut on TV on Thursday, October 18, as 30- and 60-second spots.

The campaign also includes out-of-home and social media activity. Near Halloween, several influencers will share with their followers their experience with going about their daily lives without their phones.

Three’s chief marketing officer Shadi Halliwell said, in a press statement, that “Three today is ranked the second-best UK network by performance data tracker RootMetrics, has the highest NPS [net promoter score] of the four main brands and is the best network for data”.