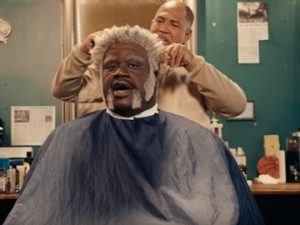 The General promotes, in a new commercial, its services and the upcoming sports comedy film Uncle Drew.

The 30-second spot, titled “Everyone Scores” and part of the insurance company’s new ad campaign in partnership with Lionsgate, features the animated mascot The General in a barbershop saying that “you don’t need high scores like Uncle Drew for everything” and Shaquille O’Neal informing that “The General can insure almost any car or driver, even if you have a less than perfect driving record.” Footage from the highly anticipated movie about the former basketball playground legend is also included, along with the invite for viewers to watch it in theaters starting June 29th.

The campaign, also including another spot, titled “Everything to Prove”, is set to begin airing on TV mid-May.

O’Neal, who has been appearing in TV and radio ads for The General for two years, has recently had his partnership with the insurance company extended for another three years. The retired, 15-time NBA All-Star stars in Uncle Drew as “Big Fella”, Uncle Drew’s former teammate who now runs a martial-arts dojo. Directed by Charles Stone III from a script by Jay Longino, the film also features Kyrie Irving as Uncle Drew, Lil Rel Howery as Dax, a streetball team manager who convinces Uncle Drew to join a street ball tournament at the Rucker Park in Harlem, Reggie Miller, Nick Kroll, Chris Webber, Tiffany Haddish, Lisa Leslie, and JB Smoove.

Nashville, Tenn.-based insurance company The General, part of the American Family Insurance group of companies, is active in 47 states and expects to be national by the end of 2018.