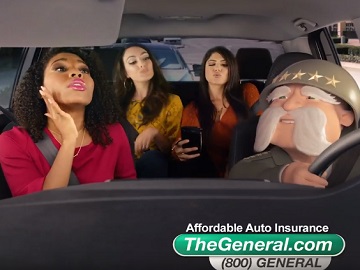 The General helps a group of cruising girlfriends to get a quote fast, using their smartphones, in one of the company’s latest commercials.

The 30-second spot opens with the insurer’s mascot, who’s at the steering wheel, talking to the tree passengers about The General services, after learning they all have car insurance issues and need affordable car insurance. He advises them to use their smartphones and get an anonymous online quote right then.

The ad also highlights that, at The General, monthly payments are low, you’ll get immediate proof of insurance, tickets & accidents are accepted, and the coverage will give you credit for any prior auto insurance in the past five years.

“Let The General help make your life easy.”, the mascot says at the end of the spot, while the tree friends are looking into their smartphones.

Besides the animated mascot, The General has also used Shaquille O’Neal in several commercials. The legendary basketball player, who was first insured by The General when he was starting his basketball career, enlisted, in 2016, as the first pitchman for the auto insurer.