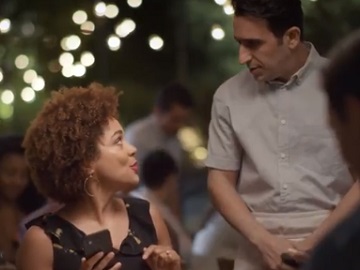 TD Bank promotes, in a new commercial, the TD Bank Mobile App, highlighting that, using Zelle within the app, you can easily split the bill, receive payments, and send money fast.

The 30-second spot, titled “Card Splitting,” features groups of people at table restaurants giving the waiter/waitress several bank cards and explaining which one should be used for specific items on the bill. A woman, for instance, asks the waitress to put all the vegetarian items on one card and paleo items on another card. A man holding several bank cards asks the waiter to put the food on the two cards he’s holding in the right hand and the drink on the other four cards he’s holding in the left hand.

The voiceover says, at the end of the spot, that “on the TD Bank Mobile App you can easily split the bill with Zelle and just about anyone using any bank can pay you back in minutes”.

The money sharing platform Zelle, which is in direct competition with PayPal’s app Venmo, has also been promoted by several other big U.S. banks, including JPMorgan Chase, Wells Fargo and Bank of America, which started running TV ads for Zelle nationally during the NFL playoffs and the Grammy Awards. Some of the ads featured celebrities.

Serena Williams and Stephen Curry, for instance, went head to head in a game of ping pong in a commercial for Chase QuickPay App, using Zelle to pay for the damage they caused with a tap. Sierra Leonean ballerina Michaela DePrince and legendary jockey Victor Espinoza also star in Chase commercials promoting the mobile app with Zelle.
Earlier this year, Zelle began running an ad starring millennial rapper and Broadway actor Daveed Diggs.