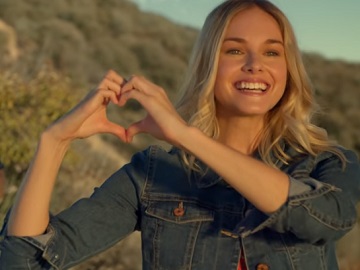 Taco Bell announces that Rolled Chicken Tacos are back at Taco Bell in a hilarious new advert, aimed at highlighting how hard it is to put those tacos down.

The 30-second commercial, narrated from the perspective of an “Instagram boyfriend,” features multiple photos of his girlfriend taken in different places across the world. But with the return of Rolled Chicken Tacos at Taco Bell, his task has become (much more) difficult, since his hands are tied. Asked by the girl to snap a photo of her making a heart with her hands against the sunset, he finds it hard to do it since the phone is in his pocket and his both hands are busy holding the Rolled Chicken Tacos. “Hey, sunset heart hands,” she reminds him with a smile that soon vanishes, noticing that he doesn’t comply to her instruction. Hearing his suggestion to just enjoy the moment, she loses patience and orders him to take the picture.

“So easy to dip, so hard to put down,” the voiceover says at the end of the commercial, adding that “Rolled Chicken Tacos are back, with your choice of dips, only at Taco Bell”.

The Mexican-inspired quick service restaurant, which serves made to order and customizable tacos, burritos, and specialties such as the exclusive Doritos Locos Tacos and lower calorie Fresco Menu, has brought back the fan-favorite item back for its seasonal menu in the past years, as well, and has given the news through similar funny ads.

The Rolled Chicken Tacos, which will be available for a limited time through the month of December, are made with shredded marinated all white-meat chicken rolled up in a corn tortilla, then deep fried, and are served with your choice of guacamole, nacho cheese, spicy ranch, sour cream, or salsa dipping sauce. Prices vary from $1.99 for two Rolled Chicken Tacos plus dip, to $3.99 for a pack of four with two dips, to $10.99 for a Rolled Chicken Tacos Party pack, which comes with six rolled tacos, six crunchy tacos and three dips. Prices may vary by location.