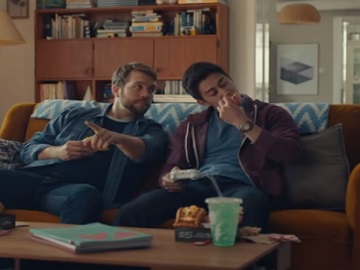 Taco Bell has released a hilarious new commercial to highlight that, when you grab a $5 Double Chalupa Box from Taco Bell, you can enter for a chance to win an exclusive Platinum Xbox One X.

The 30-second spot, titled “For the Love of Todd,” opens with a character in a videogame doing squats arm in his hands and revealing he’s being controlled by a guy named Todd. As the camera pans out on Todd, it turns out he’s busy eating a Chalupa, so he’s just pressing the button with no logic, making its videogame character to do all kinds of unuseful things, such as fire to the ground, jumping in front of a wall, and more. The character also says that Todd won an exclusive Platinum Xbox One X from Taco Bell and he’s “a little bit distracted,” but can’t help get off his helmet and shout at him to put down his Chalupa when Todd puts him in danger.

The commercial ends with the voiceover urging viewers to grab a $5 Double Chalupa Box from Taco Bell for a chance to win a Platinum Platinum Xbox One X.

Beginning on October 18 through November 21, customers who order a $5 Double Chalupa Box can text in the code on their box to see if they won one of the limited-edition boxes, which features a platinum console, a new White Special Edition Xbox One X, and an Xbox Elite Wireless Controller, as well as three months of Xbox Game Pass and Xbox Live Gold. The Mexican-inspired quick service restaurant chain has also informed that one limited-edition console, which will also feature Taco Bell’s iconic “ring,” will be rewarded every 10 minutes throughout the promotion and will be delivered to the lucky winners only 72 hours later.

Previous: Three UK Phones Are Good Advert
Next: Giffgaff A Monster Family Advert – Stay Because You Want to Stay