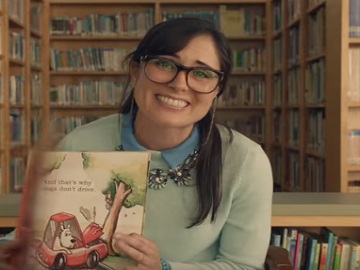 Taco Bell promotes its $5 Chalupa Cravings Box in a new commercial, highlighting that you could have all of your Taco Bell favorites for only $5.

The spot features a librarian who, after ending a story to a bunch of kids playing around her, says she loves kids but sometimes she needs a little break. That’s why she goes somewhere alone and has the $5 Chalupa Cravings Box from Taco Bell, which contains all of her favorites: a Chalupa Supreme, a Beefy 5-Layer Burrito, Crunchy Taco, cinnamon twists, and a medium drink. “And until I’m done, reality can wait,” the librarian says, addressing then a little boy who’s asking about the place she’s hiding in “And that includes you, Timmy!”

The nation’s leading Mexican-inspired quick service restaurant might find itself again in the middle of a controversy since this ad is similar with one of the Booking.com ads, in which a kindergarten teacher says, while being surrounded by children in her classroom, “there’s nothing more important to me than my vacation.”
Taco Bell has also been criticized by millions of mothers for the “foul language” used in one of its others commercials, featuring the tagline “When your morning is hell, just go to Taco Bell!”, described as “offensive”.

Country music legend Charlie Daniels had something to say about the fast-food giant’s ads featuring the “Belluminati”, posting on Twitter the message “Hey Taco Bell, The Illuminati is not a frivolous subject.” The commercial for the “Naked Chicken Chalupa” got complaints from users across social media, too, many labeling it as “racist”.