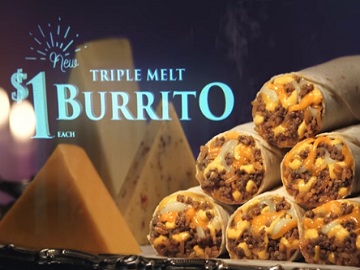 The 15-second spot, set against the same backdrop as the initial Belluminati spots, created by Deutsch, which nod to the Illuminati (a famed secret society), features the Triple Melt Burrito, which includes seasoned beef, seasoned rice, Nacho cheese sauce, and 3 cheese blend made of melty cheddar, Pepper Jack, and mozzarella, all wrapped in a warm tortilla.