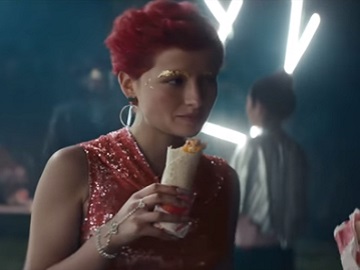 “Taco Bell invites you to a world that defies all logic,” the voiceover says at the beginning of the 30-second spot, titled “Grande Fantasy,” which features a blonde woman arriving at a party where guests are served with burritos “filled with delicious nachos or indulgent chicken enchilladas, all for the unbelievable price of $1”.

“No, you’re not having a delicious burrito dream. You’re eating the new $1 Grande Burritos from Taco Bell’s new Cravings Value Menu,” the voiceover says at the end of the commercial, which also showcases, besides the two types of burrito – Chicken Enchilada and Three Nacho Cheese – available at participating locations for a limited time only, the other items included in the Cravings Value Menu. “Value beyond belief,” the voiceover also says, concluding the ad.