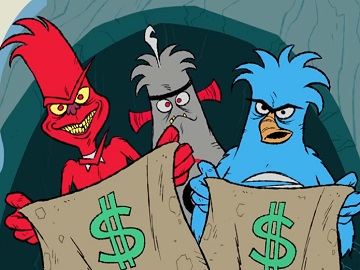 T-Mobile takes a jab at its competitors in its Christmas commercial, which is a classic holiday tale with a twist.

Titled “The Carriers Who (Almost) Stole Wireless,” the animated ad tells the story of how the Un-Carrier saved the residents of Wirelessville from taxes and fees.

“People of Wirelessville loved freedom a lot. But the greedy old carriers certainly did not. When seeing the people all happy and free they said to themselves: ‘We can’t let this be. We know what to do,’ the carrier said. ‘We’ll wrap them in fees and restrictions instead. And tiny small print and tape that is red. And if customers call to complain or deplore, we’ll spin them in circles and make them press four.’ But don’t let their scheming fill you with dread for T-Mobile is listening to customers instead. That night, when all Wirelessville was asleep, into the town the carriers did creep. Giddy with greed, they jacked up the price, making wireless bills naughty and not at all nice. When at last, their mischief was done, the carrier said ‘That was our kind of fun.’ Then back to their lair they fled with a grin and awaited with glee for the cash to roll in. But I’m happy to tell you, I’m happy to say their plan to steal Wireless did not go their way. In a flash, the Un-Carrier flew into town knocking the carriers’ barriers down. With move after move, they heard customers’ pleas to end the restrictions and fees. Those greedy old carriers, their plan was flaw, but as for the Un-Carrier, well, you know, we won’t stop,” the voiceover says.

The Magenta team makes an appearance, holding their hands in circle, as well as CEO John Legere, who passes by in a sleigh, just like Santa, saying ‘We won’t stop!’.

The current four major carriers in the US are Verizon, AT&T, T-Mobile and Sprint, so it is quite easy to imagine the tree carriers portrayed in the ad by Grinch-like characters.