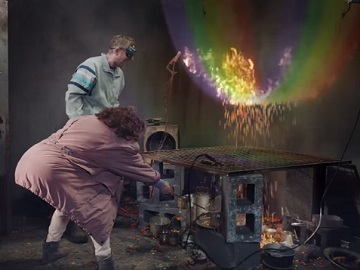 The 15-second spot, titled “Rile the Rainbow”, features a man and his mother finishing all the Sweet Heat Skittles candies they had and entering a basement where the rainbow is apparently held captive. The woman angers the rainbow to make it drop some other sweet and spicy candies, which she collects with a special device before they fall into several cans, coffee pots and other recipients placed under the rainbow.

Announced in May 2017 at the Sweets & Snacks Expo in Chicago and released earlier this year, in March, the new Skittles are available in grocery stores nationwide in five flavors: Sizzlin’ Strawberry, Fiery Watermelon, Flamin’ Orange, Lemon Spark and Blazin’ Mango. The bite-size, colorful chewy candies come in a resealable black packaging emblazoned with flames for a fiery snack on the go, but they are also perfect for parties, game-time snacks, or even as a topping for desserts. The prices are set at $0.99 for a small bag and up to $3.19 for the larger ones.

To celebrate the launch, football player Marshawn Lynch went to a senior living community to spread the news and the candies, of course, asking for feedback from the residents. Their reactions after trying out the hot new flavor have been captured in a video shared by Skittles with fans.