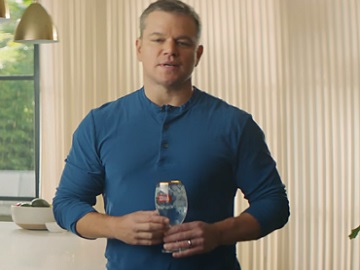 Stella Artois has released its Super Bowl commercial, which stars Matt Damon and promotes the program in which, by purchasing a limited-edition Chalice, people can help provide clean water to someone impacted by the global water crisis for five years as the brand will donate money for every purchase of the chalice to Water.org throughout this year.

“Such a simple thing: clean water at the turn of a tap. It’s like magic. Takes no time at all. Yet millions of people in the developing world walk up to 6 hours every day for water.” – the acclaimed actor says in the 30-second spot, created by agency Mother and titled “Taps”, which opens with people having clean water at the turn of a tap and continuing with people that have to spend entire hours to collect the water they need to survive. “This chalice can change that.” – Damons says, adding that, if just 1% of viewers buys one, Stella Artois and Water.org can give clean water to one million people for five years”.

“Join Stella Artois and Water.org and help give back their time.” – the actor says at the end of the commercial, which specifies that $3.13 helps provide clean water to 1 person in the developing world for 5 years and that Stella Artois will donate to Water.org $3.13 for every limited-edition Chalice sold in the U.S. between January 1st 2018 and December 31st 2018, up to 300.000 Chalices.

The beer brand and Water.org, an NGO founded by Damon in 2009 with Gary White, have already helped over 1 million people gain access to clean water in their 3-year partnership. Damon has appeared in other commercials for this cause.