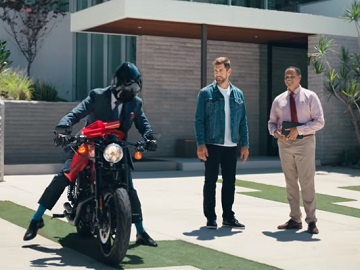 “Surprise, it’s your MVC bike,” Gabe Gabriel, Rodgers’ sports agent (played by actor David Haydn-Jones), tells Rodgers showing up on a bike adorned with a red ribbon. Asked what’s “MVC,” the sports agent says it’s “most valuable client,” which makes Rodgers point out he is Gabriel’s only client. “I’m your only agent,” Gabe Gabriel replies, but the Green Bay Packers’ quarterback, who’s in the company of his State Farm agent, played by Patrick Minnis, denies it. The latter informs Gabe Gabriel that State Farm has great rates on motorcycles and, hearing that he was going to trade that in for a boat, he’s specifying that the company covers boats, too.

The end of the commercial sees Gabriel asking Rodgers to hop on and explaining to Minnis that he’s not using a trycicle, so there’s no room for a “third wheel”.

“Go with the one that’s here to help life go right,” the voiceover says at the end of the spot.

Actor David Haydn-Jones, best known for his recurring role as Arthur Ketch on the CW series Supernatural, started playing Rodgers’ sports agent, Gabe Gabriel, earlier this year. Rodgers’ real NFL agent is a man named David Dunn, who represents the firm Athletes First. Patrick Minnis is a real State Farm agent in Tempe, Arizona, but is not actually Rodgers’ insurance agent. He has a sports background – back in the ’90, he was a sports reporter and anchor at the local ABC affiliate in Louisiana, KATC TV3. The two men were tapped to co-star alongside Rodgers in the insurance company’s “Agent vs. Agent” campaign, launched in September.

Rodgers has been a State Farm spokesman since 2011, when he starred in the series of “discount double check” ads. He has also appeared alongside his dog and his teammate Clay Matthews in ads airing in 2016 and 2017.