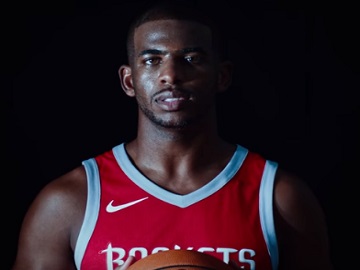 Chris Paul, James Harden and Oscar Nuñez are back on screen in a new State Farm commercial. Titled “Darkness”, the spot opens with Paul holding a bascketball in his hands against a black background, speaking to the camera about “A new team, a new beginning, a new mantle to care.” When Harden shows up and turns on the lights, asking why it is so dark in there, it turns out Paul was in a garage, trying to film a video in the dark with Nuñez. Upset for being interrupted, the latter, who plays their State Farm agent, Cole Perez, says he will never have that again, referring to Paul’s acting performance.

The two Houston Rockets players have starred together with Nuñez in other spots for State Farm, the most recent one being “Inner Dialogue”, in which they prove they all get each other so well they make a conversation look like a staring contest, since they only use thoughts to have a dialogue. NBC’s “The Office” star Oscar Nuñez started to portray agent Cole Perez, Paul’s new State Farm agent, in December 2017, as part of the “Get an agent that gets you” campaign, created by Translation. The first installment, dubbed “Grand Tour”, saw Chris Paul on a ride with Houston Rockets teammates James Harden and Trevor Ariza and Nuñez, of course, singing Backtreet Boys’ 1999 hit single “I Want It That Way”.

Earlier this month, on April 7, the insurance company gave NBA fans the chance to get inside Harden’s head at the Rockets Liftoff party at Toyota Center in Houston, TX. How? Thanks to a larger-than-life 3D installation of the Houston Rockets point guard, called “Get Inside Harden’s Head”, where people can step inside and play an interactive game to help “clear Harden’s head of distractions before the big game”.