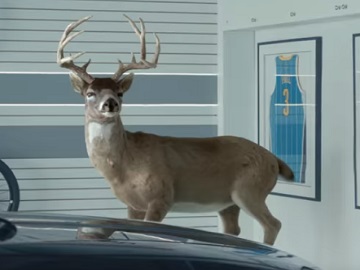 The 30-second spot opens with the Houston Rockets point guard telling his State Farm agent, Cole Perez (played by actor Oscar Nuñez), about a tense moment in one of his games, when he had to get three strikes in a row in order to try to win it. At this point, the agent – noticing a deer in the garage – reminds him he never played for the Bucks. The animal then starts hitting everything around him, from walls covered in Paul’s jerseys, gets on the car, damaging the windshield, and brings down a light, rakes the car with his antlers, smashes several garage windows and, before heading out, damages a shelf filled with bowling balls, that fall to the ground and slowly roll out of the garage.

“Don’t worry, I can help with this,” Nuñez tell Paul as they both stare at the deer. A line reading “Here to help uninvited guests go right” is then flashing across the screen, before the company’s tagline “Here to help life go right”.

Chris Paul has been associated with State Farm for long. He also portrayed his identical twin brother named Cliff Paul who worked for the insurance company in a series of commercials that debuted in 2012 and were a staple of NBA and college basketball broadcasts. In other, more recent spots, he has also appeared alongside his teammate James Harden, besides Nuñez.