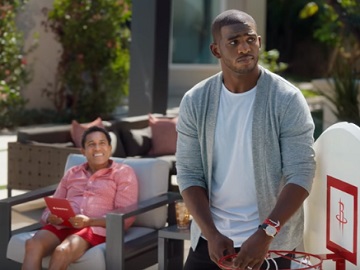 Chris Paul, James Harden and their State Farm Agent Cole Perez (played by actor Oscar Nuñez) get each other so well they make a conversation look like a staring contest in the latest commercial for the insurance company.

Titled “Inner Dialogue”, the 30-second spot is a sequel to the previous State Farm spot that also starred Paul and his new agent, who proved he totally got him since they first met. Now, the Houston Rockets’ player is sitting by the pool of his new house, in the company of Cole, who, donning a colorful outfit, with pink shirt and red shorts, is sitting in a chair. Looking around, at the yard, Paul asks “So you think my kids are gonna make….”, and Perez ends the question, proving he knows what Paul wanted to know. “are gonna make some great memories here?” “Yes”, he also says, adding “Look at that playset!”. At this point, Paul starts thinking about how well Perez seems to know him and the ad goes on by expressing their thoughts, which leads to an inner dialogue. “Ah, it’s like he knows…” Paul thinks. “Knows what you’re thinking? Comes with the job.” Perez answers in this thought. Next, Harden makes an appearance, complimenting Perez’ red shorts and the dialogue continues.

The commercial ends with the taglines “Get an agent that gets you.” and “Here to help life go right.” flashing across the screen.

This is not the first time the two NBA players and Oscar Nuñez star in a commercial together. Two months ago, the latter started to portray agent Cole Perez as Paul’s new State Farm agent, helping him de-stress given the move in a new house. They proved are on the same page also in terms of music, showing off their singing skills during a car ride to the tune of Backstreet Boys’ “I Want It That Way”. Harden and Trevor Ariza also made an appearance in the respective spot. Other athletes starring in State Farm commercials are the Green Bay Packers quarterback Aaron Rodgers and his teammate Clay Matthews.