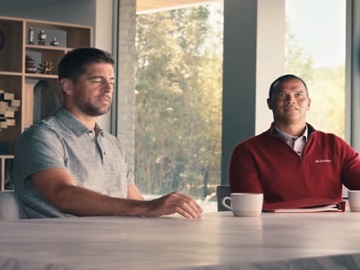 The 30-second spot opens with the Green Bay Packers’ quarterback in his living room, talking to his State Farm agent, played by Patrick Minnis (who is actually a State Farm agent in Tempe, Arizona) when Rodgers’ sports agent, Gabe Gabriel (played by actor David Haydn-Jones, best known as Mr. Ketch on the CW series Supernatural) shows up and starts asking questions about a hypotetical situation. “Ok, State Farm, let’s just say hypotetically that someone used Aaron’s bathroom and that person lit a candle and the candle accidently lit a towel on fire and the towel charred the wall,” the sports agent says. Asked by Rodgers if he had just used the bathroom, he denies it, claiming that he’s never been in Rodger’s bathroom before and that he meditates to make his needs go away. “Smells like you burned something,” Rodgers tells him, but the agent doesn’t admit anything. He comes up instead with the idea to go and investigate.

The commercial ends with the onscreen lines “Here to help rogue candles go right. Here to help life go right.”
Rodgers has been a State Farm spokesman since 2011, when he starred in the series of “discount double check” ads. He has also appeared alongside his dog and his teammate Clay Matthews in ads airing in 2016 and 2017.