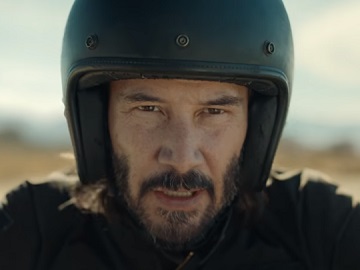 In case you’re wondering if you should make a website, Squarespace encourages to “Make It” in a new ad campaign starring Keanu Reeves, launched for this year’s Super Bowl. The company also shows you, in one of the spots, aimed at encouraging people to turn their passion into their job and start a website with Squarespace, why the Canadian actor did.

The 40-second spot features Reeves riding a motorcycle on a desert road and asking himself a few questions which are answered by versions of himself appearing in the motorcycle mirror, in a silver van’s reflection, and even in the sky. “Should I be making motorcycles?”, “Should I start a motorcycle company?”, “Should I make a Squarespace website for it?”. – his questions are and the answers given to him are all “Yes”. He cannot help but ask himself, then, why he is in the desert talking to himself, but to this question he doesn’t receive an answer anymore as his version appearing in the sky replies “Don’t ask me”.

The commercial ends with Reeves’ website created with Squarespace for his motorcycle company, called “Arch Motorcycle” and co-founded in 2011, appearing on screen along with the tagline “Make It”.

Reeves is not the first celebrity to promote Squarespace. In 2017, the NY-based company, that provides domains, eCommerce, hosting, galleries, analytics, and 24/7 support, teamed up with John Malkovich to star in its Super Bowl commercial, “Calling JohnMalkovich.com”, which won the Emmy for Best Commercial, and in 2015, it has enlisted Jeff Bridges.

In a press release, Reeves said he got butterflies in his stomach when he found out that this Squarespace campaign would be for the Super Bowl. “I love football, I love watching the Super Bowl, and I love the entertainment of the advertisements that are a part of the game and the experience.” – he also said.

This is the fifth year in a row that Squarespace airs a commercial during the Big Game. This year, Super Bowl is taking place on February 4th and is broadcast on NBC.