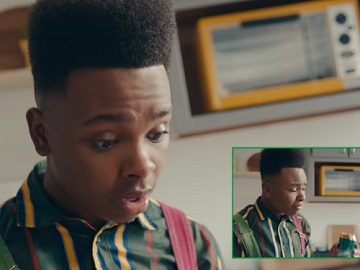 A first 30-second spot has been released with Jay Versace shocked to discover he’s “fresh outta Sprite.” The Instagram star opens the fridge and, seeing it completely empty, starts shouting “Fresh Outta Sprite!”. He even gets out on the balcony to scream at the top of his lungs and let the whole world know he and his roommate are “fresh outta Sprite.” The next shot features him opening the fridge again and seeing the Summer Sprite limited-edition collection, which includes five cans illustrated with each of the above mentioned artists. After initially closing the door, Versace opens it again and grabs the can illustrated with his face. He then starts drinking the cool, crisp, refreshing Summer Sprite, and the tagline “Unlimited Freshness for a limited time” flashes across the screen.

The Summer Sprite collection will be available until September 2nd 2018 or while supplies last, according to the brand.

The commercial is set to make its debut on Sunday, June 24, during the BET Awards. The campaign will also include a 15-second spot featuring animated versions of the creatives, which will also be released this month.

Jay Versace first became known for his random, comedic content on the 6-second video app Vine. He runs a popular YouTube channel, which has over 700,000 subscribers, and he is also extremely popular on Instagram, with more than 3 million followers.