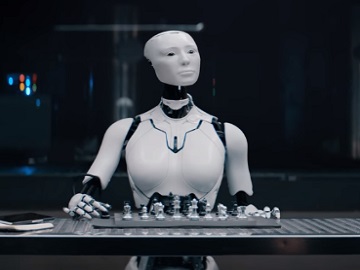 Sprint has released its Super Bowl commercial, which takes a jab at Verizon, featuring a hyper-intelligent robot that knows paying twice as much for four lines for less than a 1% difference in reliability with Verizon isn’t smart.

Titled “Evelyn”, the 60-second spot opens with a scientist recording a note about the progress made with a robot called “Evelyn”. “This is the fastest progress we’ve seen from artificial intelligence. Evelyn continues to learn at an exponential rate.” – the man says, while Evelyn is seen playing chess at a table, where his smartphone is left, as well. Seeing a text message received from Verizon by her creator, Evelyn interrupts him, telling him she still doesn’t understand why he has Unlimited with Verizon. “Why wouldn’t you switch all your lines to Sprint?” – she asks, adding that she has analyzed the data and “Sprint’s network reliability is less than a 1% difference than Verizon’s”. “Yet you choose to pay twice as much.” – she highlights, making the “doctor” say he’s never thought of that. At this point, several other robots starts laughing at his expense and teasing him, making him head to a Sprint store and switch. Asked why he’s switching to Sprint, he replies “My co-workers are making fun of me”.

Developed in partnership with agency Droga5 and released with the hashtag #EvelynIsLearning, the spot will run during the first quarter of the Big Game, which airs at 6 p.m. on Sunday, Feb. 4 on NBC. This is the second time the communications services company and the creative shop have collaborated on a Super Bowl commercial.

Roger Solé, Sprint chief marketing officer, said in a press release that “Robots like Evelyn tell it like it is, and when it comes to wireless service, it’s just simple math.” “It is 2018 and all networks are great so why pay twice as much. Sprint offers the best price for unlimited. Period.” – he also said.