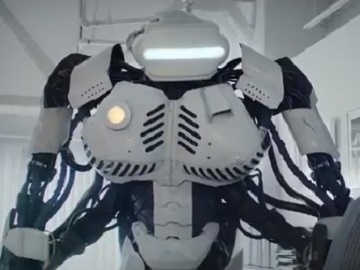 Evelyn and her fellow robots are back in a new ad campaign for Sprint. After introducing the hyper-intelligent robot Evelyn earlier this year, in February, as the protagonist of its Super Bowl commercial, Sprint has released two new hilarious ads to promote its services and the limited-time deal on Samsung Galaxy.

The first spot, titled “Time To Go”, features Evelyn and her “crew” leaving the scientist that created them and going to Sprint to work there, as he suggested without imagining they would actually leave. Willing to help humans get the best price for Unlimited and switch to Sprint, the intelligent robots go to Sprint headquarters and communicate their intentions to the receptionist.

The second spot features a robot within the Engineering department at Sprint headquarters telling some engineers that he has analyzed the data and “these days all networks are great. Yet, some humans choose to pay so much more with Verizon when they could be saving with Sprint.” When one of the engineers reminds him that “Sprint has the best price for Unlimited”, the robot adds that “Sprint offers 50% off a Samsung Galaxy S9 lease”. His suggestion to tell all humans is welcome and, in response, he is advised to find Joanne and marketing ASAP. At this point, the robot walks through a wall to get into the meeting room where Joanne and her department colleagues are and asks her to tell humans about the 50% off deal ASAP.

The commercial ends with the voiceover urging you to “switch to Sprint and get excited about the Samsung GS9 at 50% off lease”.