Home / ICT / Spectrum Mummy and Death on a Walk Commercial 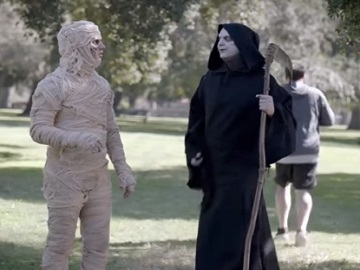 Spectrum highlights that “Complicated Video on Demand set-up is evil” in a new ad part of the “Monsters” campaign.

The 30-second spot features Death and the Mummy taking a walk and discussing the horrors of rigmaroles while Death is on the clock.

The Mummy tells the Grip Reaper that, if he messes up, he has to unwrap and do the whole thing over again, which makes him arrive in delay at his destination. “Well, with DIRECTV setting up your Video on Demand is a big rigmarole,” Death says, mentioning that he would have an HD DVR, Internet service and then he would have to “install a cinema connection kip thing.” “Obviously, they don’t care about the people,” the Mummy concludes, adding that “you have to care about the people.” At this point, a man jogging passes by and Death remembers he has “work” to do.

“Complicated Video on Demand is evil. Spectrum is simple.” the voiceover says at the end of the spot, adding the company’s famous tagline, “DIRECTV BAD. SPECTRUM GOOD”.

Developed by creative agency Something Different and launched in April 2017, the “Monsters” campaign also features an evil professor, a mummy, Mr. Werewolf and Mrs. Werewolf, Demon, Gary. In one of the spots, that focuses on service disruptions, they are on a commuter train chatting about their weekend plans and the problem that Death is having on the home front. Other spots, featuring the monsters playing charades and poker, tackle, instead, issues like deceptive pricing and the lack of channels and features.