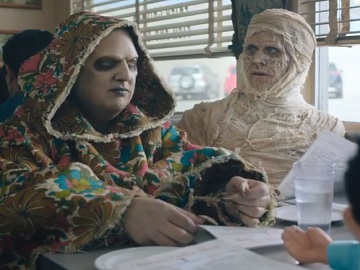 Spectrum has released a new commercial, highlighting that “confusing deals with catches are evil” and Spectrum Mobile doesn’t do that.

The 30-second spot, part of the “Monsters” campaign, features Death joining his fellows – the Mummy, the Demon and Gary, a ventriloquist’s puppet, in a diner, wearing a colorful robe instead of his usual black one. Derided for his clothing by the Demon, who asks if “this is the Fashion Week as a supermodel just walked in,” the Grim Reaper says his black robe is in the cleaners and reveals the reason he’s upset. “I went to T-Mobile to check out their new deal, but you have to have four lines to get it. You only want one or two lines? There’s no deal. So I got mad and I was yelling and I spilled by smoothie all over myself,” Death admits. To his surprise, the Demon says he likes it, but the Grim Reaper has some doubts. “Do you think? Does it say Death?” he asks. An answer comes from Gary, who says it “smells like death,” which makes the Mummy and the Demon call out his name to remind him that he’s not supposed to be that brutally honest.

Developed by creative agency Something Different and launched in April 2017, the “Monsters” campaign also features a mad scientist, Mr. Werewolf and Mrs. Werewolf, and a Vampire family. Other spots tackle, instead, issues like service disruptions, deceptive pricing and the lack of channels and features. So far, things like complicated Video on Demand, automatic service charges, slow internet, and others have been described as evil, and DIRECTV has been presented as “Bad” while Spectrum as “Good”.