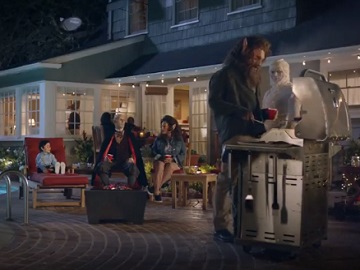 Spectrum’s Monsters are back to the small screen in a new commercial, aimed at highlighting, as always, that DirecTV is bad and Spectrum is good.

The ad features the Monsters by the pool, at a barbecue party. The Mummy, who’s standing near the barbecue, asks Mr. Werewolf what kind of cheese he’s planning to put on top of the burgers he’s handling. The answer, that they come with the cheese inside, makes the Mummy quite enthusiastic. In the meantime, Mrs. Werewolf tells her guests about her experience with the DirecTV guy, who finally showed up and took them $99 – which it turned out was the automatic charge, written in the contract – because the dishes wires were loose. The Mummy and Dracula start then to ask a series of questions aimed at emphasizing how ridiculous is to force clients pay such a charge, of this value, like “What if birds build a nest in there?”, “What if there is a sandstorm?”, “What if there’re vultures living in there?”, “What if aliens live there?”, which makes Gary the Dummy raise another question: “What if we fill the evening with senseless chatter?” The bottom line is that “if someone (from DirecTV) shows up, 99 bucks, even if they don’t find anything”.

The commercial ends with the voiceover stating that “Automatic Service Charges are evil” and “Spectrum doesn’t have them” and adding the company’s tagline, “DIRECTV BAD. SPECTRUM GOOD”.

Developed by creative agency Something Different and launched in April 2017, the “Monsters” campaign also features the Mad Scientist, Death, Demon, Mr. and Mrs. Vampire. In one of the spots, that focuses on service disruptions, some of the monsters are on a commuter train talking about their weekend plans and the problem that Death is having on the home front. Other ads, showing the terrifying creatures playing charades and poker, tackle, instead, issues like deceptive pricing and the lack of channels and features.

Spectrum urges people to free themselves from evil contracts and get Monster Savings with a Spectrum Triple Play. The company provides clear HD picture in any weather, fast Internet speeds with no data caps, and over 18 popular calling features. In addition, it also offers a contract buyout program for up to $500.